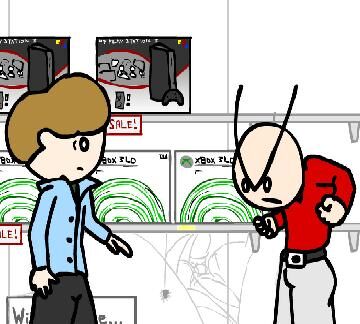 Wii Are Sold Out is a comedy Flash movie by SardonicSamurai. It's about a guy who asks an electronics specialist at a store if they had any Wiis in stock. But he doesn't expect what happens next. The flash was rated +17 for very mild sexual humor and language

(Electronics Specialist tries to get a PS3 on the top of a shelf)
Customer: Hi, excuse me, mister employee sir.
Electronic Specialist: Yeah, can I help you find something. *laughs*
Customer: Yes, actually, you can. I just watched this wonderful commercial on TV where there's these two Japanese boys, well I think they're boys, I don't know, but they're really short. Anyways, they came to these people's houses, and was like knock knock, and the people we like "Who is it?", and they were like "Japanese people" and the people were like "Oh my God!" And anyways they were like "We would like to play." and the people were like "OK, come inside and play." But if I were those people, I would not let those people inside my house. Because I know they would rape, and all that bulls***. Anyways, they came inside their house, and started flaring their arms around, and the people were like "Oh my God, I'm having so much fun!" And I was like "Oh my God, I need to have some fun too!" So I was wondering if you had this thing in the commercial called a Nintendo Wii in stock?
Electronics Specialist: *starts to become angry and does furious gibberish* No! NO! We are sold out of the Wii! We have been sold out of the Wii for months! Why do you stupid f***ing people ask me every f***ing DAY! *screams* But we might have some in by February. *laughs*

Wii Are Sold Out has over 720,000 views as of August 2010. It's review count stands at over 3,500. It won the daily first and Weekly Third Awards, and is featured in the Funny Cartoons collection.

Retrieved from "https://newgrounds.fandom.com/wiki/Wii_Are_Sold_Out?oldid=22795"
Community content is available under CC-BY-SA unless otherwise noted.