P-Bot is one of the six Newgrounds Bots that help Newgrounds with different assignments. Although they are simply bot programs on the computer, each is given a persona, including a picture and a user page on Newgrounds, which lists their functions and may have messages from the bot. Each is characterized by having a different aura.

P-Bot picks the daily Flash Portal winners and announces them on the front page every day, and removes submissions that fail to reach the required score during Judgment. It is said that he "blams" them with his BLAM cannon. He also sends confirmation messages to the e-mail of users when they create accounts.

P-Bot also picks the judges for the top monthly games and movies. 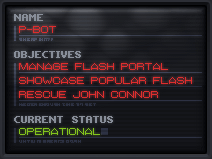 Retrieved from "https://newgrounds.fandom.com/wiki/P-BOT?oldid=33214"
Community content is available under CC-BY-SA unless otherwise noted.