Malachy is a high-ranked user, prolific Forum poster as well as a Chat, Forum and Review Moderator. He attended a Mod meet in 2008. He is co-authored on three high-scoring movie collaborations.

Malachy describes his work as a review mod and the current general nature of NG reviews HERE. He examined and found that he removes around 4% of reviews in a given day as abusive, and he describes most reviews as acceptable and helpful. He studied the typical review scores and found that overall the range of review scores is not the 0 or 10 people claim it usually is.

With approximately 24,000 posts since joining in 2003, Malachy is ahead of most forum regulars, including other moderators and staff (with the exceptions of Bahamut, CapnCrunchDaPimp, Gagsy, and ZeroAsALimit. His post rate is currently 6.44 per day.

His posts are mainly in the Wi/Ht Level Up! Lounge and The Regulars Lounge Thread. He uses only correct punctuation and lettering in more important posts. He has won at least one award in the BBS Awards for the past three years including the "Worst Mod" award in early 2011 which received mixed responses. 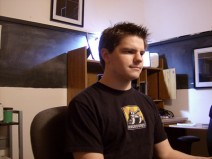 Retrieved from "https://newgrounds.fandom.com/wiki/Malachy?oldid=31185"
Community content is available under CC-BY-SA unless otherwise noted.