M-Bot is one of six Newgrounds Bots that help Newgrounds with different assignments. Although they are simply bot programmes on the computer, each is given a persona, including a picture and a user page on Newgrounds, which lists their functions and may have messages from the bot. Each is characterized by having a different aura.

M-Bot- Assists moderators by notifying users of bans and removals regarding forum posts and submission reviews, usually sending a message by PM. 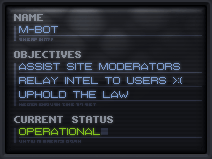 M-Bot is dark grey and has only a tiny pic on his page. He is secretive, with replies to his user posts disabled.

M-Bot The Game- This is a game created by Mindchamber and Evan Greenstone; also M-bot is credited as having contibuted. In this game we take the place of M-Bot who has to save Newgrounds by fighting against spammers. At the end we see a mysterious boss named Col-Lab.

M-bot features in some pieces of art in the Art Portal made by MindChamber. One of them is based on M-Bot´s K-9 mode, which is a form where he appears as a beast in his M-Bot game.

Retrieved from "https://newgrounds.fandom.com/wiki/M-BOT?oldid=31894"
Community content is available under CC-BY-SA unless otherwise noted.