Start a Wiki
Joshua Bednowski AKA Josh Bend or Bedn was a prominent Newgrounds user considered a part of Newgrounds history. Josh Bend is well known user among most people who have been at Newgrounds for long enough. He is most famous for starring in just about every Photoshop thread at Newgrounds, much like 4chan's Cockmongler. He is one of the original founders of retrogade.com a NG like site except with Photoshops instead of Flash. He once traveled to meet Wade Fulp at his store. Josh has made several flash movies, but would eventually delete his Newgrounds account.

At 7/17/04 11:46 PM Wade Fulp posted a thread called Photoshop Bend! It grew rapidly, reaching 100 pages at 1/1/06 04:30 AM. The thread was locked when grew to 141 pages. Most of the Bedn photoshops use the original Bedn picture of Josh Bend standing next to Wade Fulp in Wade's store. While there have been many alternate pictures of Josh, they are only utilized for a short while before everyone reverts to using the original pic. It is an unspoken rule that every single photoshop thread must include at least one picture with Bedn.

Josh Bend is one of the original founders of Retrogade. Retrogade is pretty much a copy of Newgrounds except with Photoshops instead of flash. One time Bend was deleted by another staff member due to not doing his job. He was re-admined later. As of 5/4/07 retrogade is no longer online.

This is a copy and paste from here

It was written by Josh Bend himself.

I'm not good at writing biographies about myself. I was born and partly raised in Bensalem, Bristol, Morrisville, and Falls Township. I currently reside in Falls Township, Pennsylvania. Which is a small municipal town outside of Philadelphia. Which is also in Bucks County.

I got into Web Design at a very early age. I started making websites in 1997, the first site I ever made was southparkland.com in 1998 which quickly died out in a few monthes due to bills and me being 13 years old at the time and very poor. Which brings me to why I can convince people to help me out. (Hint: Pilot-Doofy purchased the domain name and I'm hitching hosting off Retrogade.com). That is how I roll:

Moving on: After southparkland.com died down, I started frequenting Palace Chat Rooms using a visual client which was very native back in '98. I started using Palace in 1996 under various different names. I stopped using that chat in 2000.

Then in 2001, that's when things went downhill for me. I was arrested for possession of a weapon on school property. I had a stencil knife which is a small blade attached by a small metal rod for cutting paper. I was sentenced to 6 monthes juvenile probation, which is ridiculous because it was not my fault, I left the supplies in there when I would take my art supplies around during the summer.

After I got off probation in 2002. I had my nose clean until the night of July 10th, 2003 when in a drunken stupor I forced my way into the Bucks County Technical High School and was quickly arrested along with my long time friend Jeramy Stansberry(AuraSilver). This was the first time I ever got held in custody, it was a scary experience for me. I was held at the Bucks County Correctional Facility. I was shortly bailed out and went and lived at my parents.

March 2004: I was sentenced to BCCF for 2 monthes to 23 monthes for the burglary, which is a good sentence. With the help of my lawyer, I served the minimum of 2 monthes on House Arrest.

Let's move back to 2002(THE CADNY JOKE): One night I went to a local supermarket called "GIANT" with said Jeramy Stansberry to screw with the employees heads. We went to the candy aisle and put a shit load into the bag to buy. We ate some straight from the box we scoop it from because we were stoned as fuck and needed something to eat. An employee saw us and insisted we pay for our bag of candy and leave. The bag came out to something, and I was short 12 cents. 12 MOTHER FUCKING CENTS! The lady then notified the police and we were cited for disorderly conduct. The charges were dismissed because there was no sign stating we cannot have free samples. I then posted that story on the now deceased clockcrew.cc forums. The clocks blew the whole story out of porportion and the cadny jokes started flying.

Stalking Joke: I was a bit of a obsessive compulsive freak when I was younger, the urge to meet someone famous is like having a bee crawl up your nose. You want to scratch at the bee, but your instinct forces you not to. I know what I did was a bit on the freaky side, but sorry Tom and Wade for scaring you guys, I was only sixteen years old, give me a break!

As of this year, I am currently unemployed and looking to do web design and help out others do websites. I am making the most out of my time and I do not want to be known as the loser I once was.

This site is dedicated to my brother Joseph Diaz-Bend who I have not spoken to in over a year and a half. I am not indulging information about my brother due to his privacy, please respect me and my privacy. So do not ask me what happened, please. 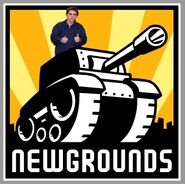 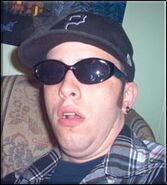 A new photo of Bedn

This has been done too many times

Not even Warhammer is safe.
Add a photo to this gallery

Retrieved from "https://newgrounds.fandom.com/wiki/Josh_Bend?oldid=29192"
Community content is available under CC-BY-SA unless otherwise noted.