I-Bot is one of the six Newgrounds Bots that help Newgrounds with different assignments. Although they are simply bot programmes on the computer, each is given a persona, including a picture and a user page on Newgrounds, which lists their functions and may have messages from the bot. Each is characterized by having a different aura.

I-Bot helps users filter and sort Art Portal submissions, and pick each day´s winning works of art. The Art Portal is a recent addition to Newgrounds, and I-Bot works in it, so maybe in the future more tasks will be assigned to him. 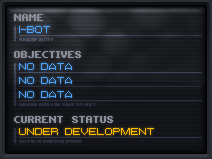 As of June 2010, a note under the box says "Development nearing completion"

I-Bot submitted the first art to be scouted into the Art Portal. His art is a simple drawing of a man sitting by a bonfire made in a notebook.

I-Bot on the BBS Edit

I-Bot occasionally makes posts on various threads on the BBS, always beginning his comments with "My robotic sensors indicate that..."

Retrieved from "https://newgrounds.fandom.com/wiki/I-BOT?oldid=29207"
Community content is available under CC-BY-SA unless otherwise noted.