Although Newgrounds is relatively secure for a site with such a high profile, occasionally accounts have been hacked. Newgrounds is not easy to attack by brute force, since multiple attempts to give wrong passwords result in the account locking, However,password information can be gained by phishing, such as creating a website that would attract people who are interested in Newgrounds and using it to get passwords, in the hope that the user users the same password on Newgrounds. Another known method is to create a bogus account, such as a bogus Newgrounds Bot or an account that looks like that of an admin then using it to ask for info such as passwords.

One infamous incident of this was when Bedn logged a moderator's password on his site and used it to cause trouble on Newgrounds. Bedn is known to have hacked the StrawberryClock account.

Another less dramatic case was in this thread, when Dobio convinced another user multiple times to give his password away through manipulation. This was not malicious, it was purely for comedic effect, but it is a good example of how easily these things can happen to people who aren't wary.

Review moderator Canas had his account hacked on the 25th of August 2011. Many people were 'permanently' review banned and whistles were reduced for many people. Wade reversed the bans shortly after, and de-modded Canas. Canas shortly apologized and explained what happened here. The hacker's "work" was largely undone on the same day and people who have had their reviews deleted are free to put them back if they wish. Tom explained what happened in his post and various people related their experiences and reactions.

The Soup Sqaud, a small flash crew which came to prominance at this time appeared to be connected with "Canas 2011". Their name was put in some of the review bans and their seemed to be some connection with the reviews deleted and Soup Squad. However, the Soup Squad deny any involvement and it is known that they were suffering from impersonation and attack at that time. Nothing about the work of the official Soup Squad crew would suggest that they are disruptive.

The admin of Newgrounds can usually get to the bottom of hacking if they are informed, though it may take time and work to prove who is who and what is what and damage may be done that cannot be undone. It is better not to get hacked in the first place:

There are simple ways to reduce the risk of getting hacked: 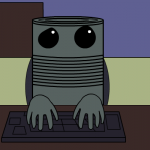