G-Bot is one of the six Newgrounds Bots that help Newgrounds with different assignments. Although they are simply bot programmes on the computer, each is given a persona, including a picture and a user page on Newgrounds, which lists their functions and may have messages from the bot. Each is characterized by having a different aura.

As per his Userpage: 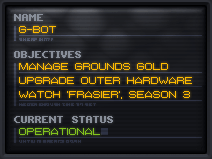 According to FAQ, G-bot "Creates, ranks and files user accounts"

G-bot was created to manage the Grounds Gold in 1999. He writes in an academically educated style. Because of this, he is often ridiculed as a "nerd" on his userpage, and he once even wrote a response to such insults, claiming to be hurt by them.

He is a discreet bot, little seen or known on Newgrounds.

Retrieved from "https://newgrounds.fandom.com/wiki/G-BOT?oldid=29203"
Community content is available under CC-BY-SA unless otherwise noted.