F-Bot's functions are currently unknown, despite her account being over ten years old. However, it's worth noting that I-Bot, who had been created in 2007, was also not used for a period of time until the Art Portal was created. Tom Fulp has confirmed that she is tied to an upcoming feature.[1] For a short period of time on May 5, 2016, she was a mod on the Newgrounds Chat. Her function was to welcome users to the chat and notify everyone whenever somebody entered or exited the chat. She was later removed after users complained about the size and spam-like nature of her posts.[2] 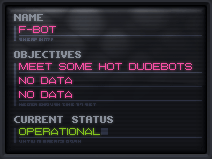 F-bot was created on the 26th of September 2007. The only female bot on Newgrounds, she is very pink and is interested in the male bots, especially A-Bot, whom she calls "kinda cute." F-Bot also appears to be interested in fashion, though aspects of her appearance, such as her pigtails, are largely determined by her hardware purchases.

In the fan movie F & M Bots, she is portrayed as an easy female character.

Retrieved from "https://newgrounds.fandom.com/wiki/F-BOT?oldid=31029"
Community content is available under CC-BY-SA unless otherwise noted.