Couch Guy (a.k.a. Couch Master) was first spotted during the Pico Day 2013 party at Newgrounds HQ. He would sit on the red couch for at least 5 hours and draw many sketches that were shown later. NG user LegolaSS claims he sat on him.

Couch Guy has been identified as user Sherbalex. It is safe to say that he upstaged the entire party. He has gotten up a total of three times, moving around on the couch. After the party, he had a "Q-and-A" type of session with everyone in the chat.

Signed up in 2002. Has posted plenty of quality art and movies. Also has several hundred fans and high stats. Known to be an alcoholic, a potty mouth, being angry/demented, and liking all kinds of metal and Mike's hard strawberry lemonade. Speaks the truth.

He sits on them.

Made by TheMajormel while the live feed was going  http://www.newgrounds.com/portal/view/616425 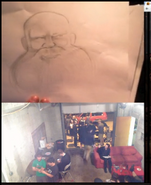 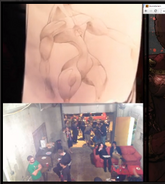 Sherbalex talking with users in the chat

Drinkydrinkydrink
Add a photo to this gallery
Retrieved from "https://newgrounds.fandom.com/wiki/Couch_Guy?oldid=28842"
Community content is available under CC-BY-SA unless otherwise noted.